Obito is probably one of the characters from Naruto that changed the most throughout the manga/anime.

He went from dreamy & hopeful, to evil mastermind, and finally to redemption.

This means a wide variety of Obito quotes for us to choose from...

Let’s see all of the best Obito Uchiha quotes from Naruto Shippuden!

Obito Uchiha was a ninja from Konoha, initially in Team Minato, alongside Rin Nohara and Kakashi Hatake.

He died young during the Third Shinobi War, and gave his left Sharingan to Kakashi in his dying breath.

However we later learn that Obito didn’t die, but was saved by Madara, who used him to execute his masterplan. Obito then took the lead of Akatsuki in the shadows, and showed himself to the world under the personage of Tobi.

Finally, after fighting against Naruto and Kakashi, his old partner, he changes his mind and redeems himself by sacrificing his life to protect the world.

Through all of the different phases, Obito left us with a wide variety of quotes:

Here are the best Obito quotes:

So there you have them, the 10 best Obito sayings!

Oh, let’s not forget the epic 100% badass Obito sweat quote: “Am I sweating? No, it’s just the rain. These fools could never make me sweat.” Check it out in the video below:

Obito was a tormented shinobi, that spent a lot of time questioning the meaning of life.

Throughout the episodes, he has some pretty deep lines about life.

Let’s see them in this category.

Find below Obito quotes about life:

And that’s 10 Naruto quotes Obito said about life and the world.

Left for dead at a young age, he then witnessed the love of his life being brutally murdered in front of his eyes by his best friend.

This category is dedicated to sadness, expressed by Obito.

Read all the sad Obito quotes:

That about wraps up the sad Obito quote part!

Don’t despair, let’s look at the bright side with our next category.

Before becoming the villain we mostly know him for, Obito was a real friend.

He believed in the power of friendship, and could give everything for those he held dear.

Let’s dive deep in the friends quote Obito Uchiha gave us in the manga.

And there you go, 9 great Obito quotes to Kakashi (and others) about friendship!

Let’s follow it up with the logical next category after friendship, love.

This is our last themed category in this post.

Though it doesn’t contain nearly as many quotes as the previous categories, Obito has a few powerful lines about love.

Find below Obito quotes about love:

If you were looking for a Obito Uchiha quote about love, you’ve got it!

But the list is not over yet; keep scrolling 👇

And finally, the last part.

In this part you’ll find a compilation of quotes from Obito, that didn’t fit in any of the categories above.

Here are the last from Naruto: Tobi quotes:

And there you have them all, the 63 Obito best quotes!

My personal favorite is #4 “You need to let that guilt go, Kakashi.” – it was such a powerful & emotional episode, where we learn about Kakashi’s story, and what he went through during all these years, carrying such a burden on his mind. 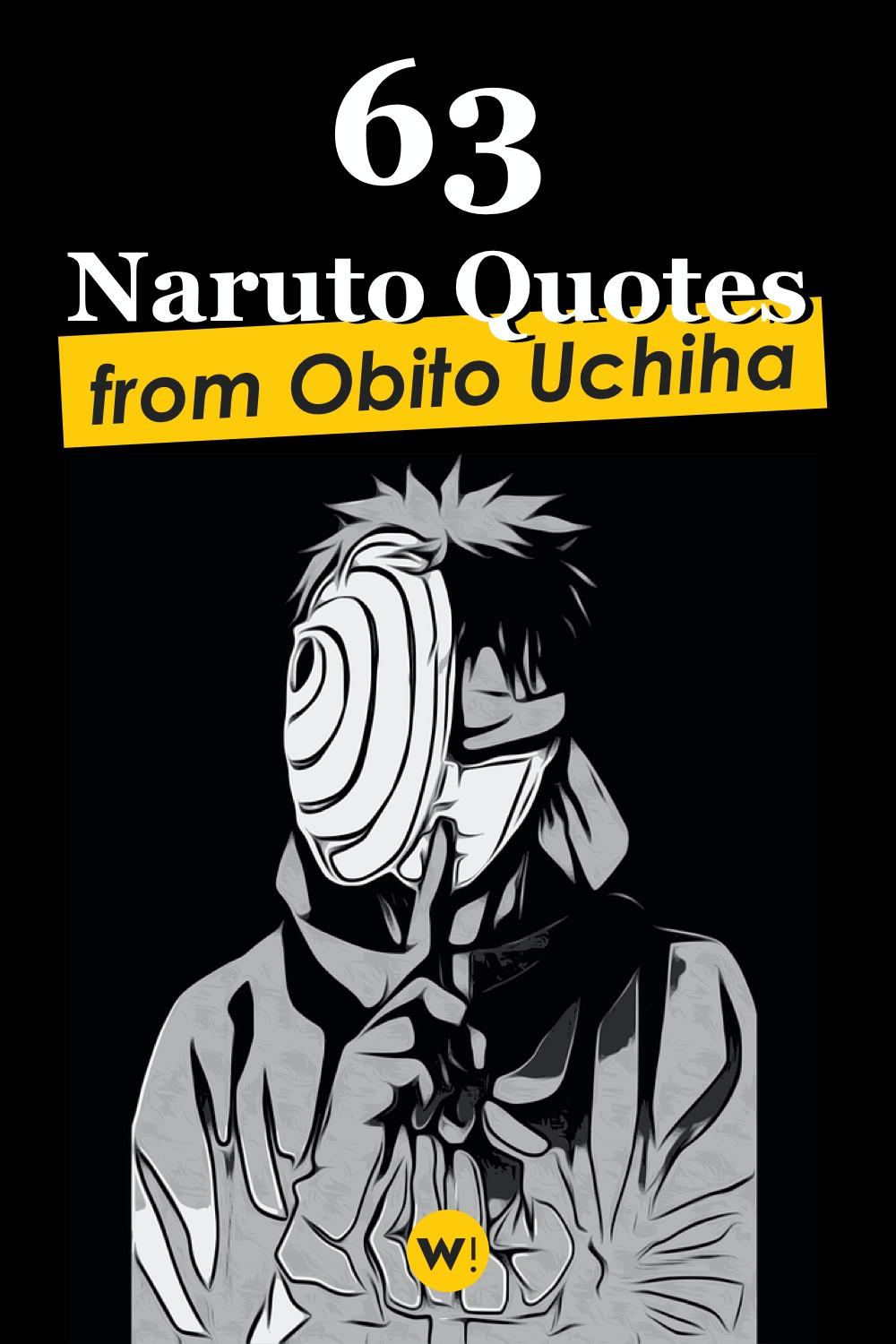